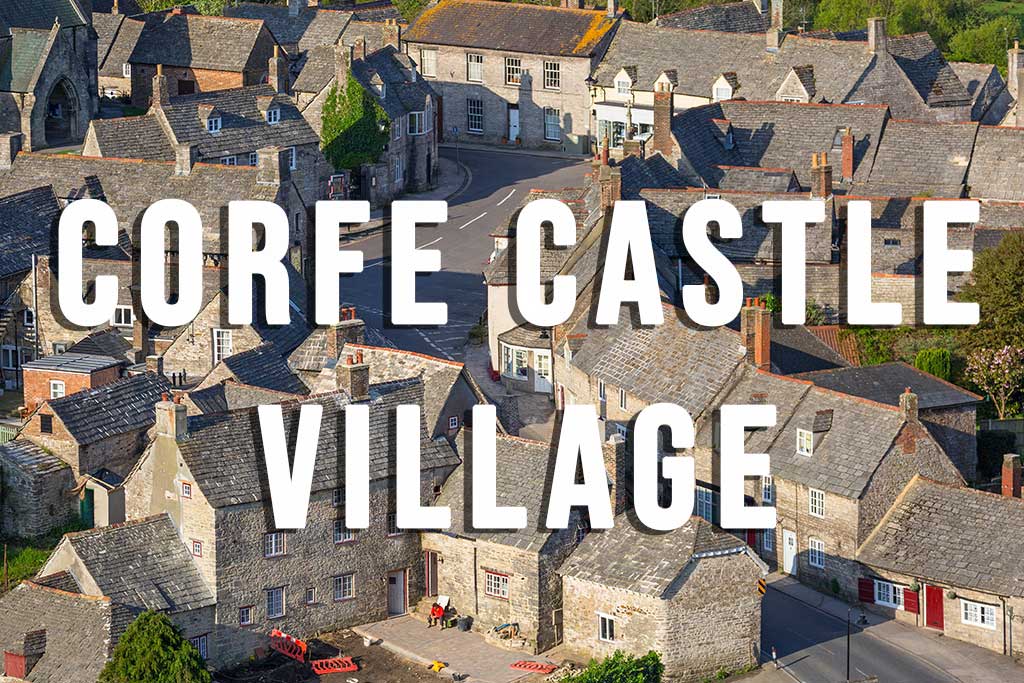 Corfe Castle village lies in a gap in the Purbeck Hills on the route between Wareham and Swanage. It is a beautiful village filled with stone cottages with slate-tiled roofs. A ruined castle of the same name stands strategically on a hill overlooking the village which, in the past, guarded access through the gap in the hills.

The highlight of the village is obviously Corfe Castle which is managed by the National Trust. For more information about the castle including entrance fees see our webpage Corfe Castle. However much of the castle can be admired from the village or from walking up to the top of the surrounding hills.

The Corfe Castle Model Village, located by the village square, is home to a 1/20th scale model of the castle and village which shows how it looked like in 1646 before the castle was destroyed. As you will see, the village hasn’t changed much over the span of years.

St. Edward’s Church lies in the village square and was probably built during the late 12th century. It is dedicated to King Edward, Saint and Martyr, who became King of England from 975 until he was murdered at Corfe Castle in 978 aged just 16, reputedly on the orders of his “wicked” stepmother Queen Alfthryth although the circumstances are not altogether clear. Folklore has it that the church stands on the site of a blind woman’s cottage where the king’s body was hidden after the murder. The blind woman had her sight restored when she discovered the body, just one of the miracles that earned him sainthood.

The village has a small square or market place with a stone cross and village pump, a couple of tearooms, a village bakery (selling great pasties, cakes and sandwiches), a post office, a handful of gift shops and four very good pubs. The lane to the right of the Banks Armes Hotel leads to Corfe Railway Station which serves Swanage Steam Railway.

If you are planning on parking in Corfe Castle and taking the train to Swanage then it may be cheaper and more convenient to park just outside of the town at Purbeck Park in Nordon. Purbeck Park is large car park which costs £4 all day (price subject to change). You can catch the train from Purbeck Park (Nordon station) or easily walk to Corfe Castle which takes about 20 minutes.

If you want to park in Corfe Castle village then you have a few options.:

East Street BH20 5DR (Google map). If approaching Corfe Castle from Wareham along the A351 the car park is on the left before you get to the village.

You can pay at the Pay & Display machines using cash. Alternatively you can pay for parking using PayByPhone by either using the app or online. The PayByPhone location code for this car park is 803345

Free car parking if you are lucky!

Directly opposite the National Trust car park is a turning signposted to Church Knowle. Just as you enter the road there is a lay-by on your right with parking spaces for around 10 cars. (Google maps). It’s free to park here all day however spaces fill up quickly so during the high season so you are lucky if you find a space. This car park is particularly convenient for walkers or photographers who plan to climb to the top of the hill to the west of Corfe Castle which offers spectacular views of the castle particularly at sunrise. A good view point can be found at here on Google Maps. Don’t leave photography equipment or valuables in your car as there is no CCTV at this car park.

Capacity 125 spaces (2 disabled). Car park charges are given below. Payment can be made using cash or using JustPark www.justpark.com to pay either online or using the parking app. The car park location number for this car park is 7715