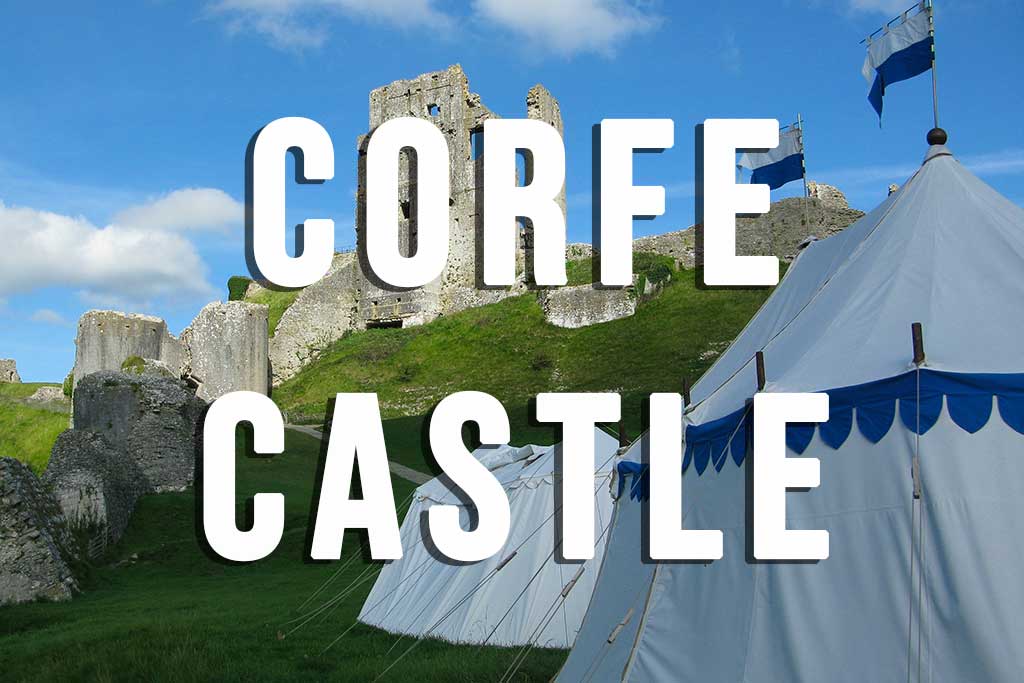 Google map of the Castle

Corfe Castle is owned by the National Trust. The official webpage can be found at https://www.nationaltrust.org.uk/corfe-castle

Entrance is free to National Trust Members but admission charges apply to everyone else – for entrance ticket prices see below. The ticket office and entrance is just off the corner of the village square. There are leaflets and guide books available but a much larger Visitors Centre is located just outside the village near the National Trust Car Park – location shown on the map below.

Entrance Fees for non-members is as follows:

Corfe Castle was built by William the Conquerer (William I) in the 11th century soon after the Norman Conquest of England in 1066 (remember William’s forces killing King Harold by shooting an arrow in his eye at The Battle of Hastings – The Bayeux Tapestry from school history lessons). King William I was the first Norman King of England (yes that’s right, he was actually French). Corfe Castle was just one of 36 castles that William I established around England following his successful claim to the English throne.

The castle underwent major structural changes in the 12th and 13th centuries. Sir John Bankes bought the castle and all its manors, rights and privileges in 1635. Sir John Bankes was Attorney General and Chief Justice to King Charles I during the English Civil War (1642-1651).

The English Civil War was a series of wars between Parliamentarians (Roundheads) and Royalists (Cavaliers) principally over who should rule England. The war ended with victory for the Parliamentarians on 3rd September 1651.

When war broke out Sir John Bankes, a Royalist, followed King Charles I from Westminster to York and left his wife, Mary Bankes, to defend Corfe Castle. She did this with great courage. The castle was twice besieged by Parliamentarian forces. The first siege in 1643 was unsuccessful the castle finally fell in 1645 when Mary Bankes was deceived by one of her own garrison officers. The castle had been under siege without supplies for several weeks. The garrison officer, in collusion with the commander of the Parliamentarian forces laying in wait outside the castle, proposed to leave to go to Somerset and bring back Royalist reinforcements which he did. However the troops he returned with were actually Parliamentarians in disguise and once the Parliamentarians started to attach from outside they were met with attacks from within as well and Corfe Castle was quickly captured.

Lady Bankes and her garrison forces were allowed to leave. In the same year Parliament ordered the castle to be destroyed. The castle has been left in ruins ever since. Much of the stone was used as a ready supply of building material by the villagers.

Sir John Bankes didn’t fare so well. In 1644, the year before Corfe Castle was beseiged, he was impeached of high treason by Parliament for denouncing various prominent parliamentarians as traitors. Later that year he died at Oxford, aged 55, and buried at Christ Church cathedral. His estates were sequestered by the government after his death. After the restoration of the monarchy in 1660, the Bankes family regained their properties. Rather than rebuild the ruined castle Mary Bankes and her sons built a new house at Kingston Lacy. This property is now also owned by the National Trust. If you want to read more about the Bankes Family then just visit our Kingston Lacy page.

Corfe Castle is a small village with narrow streets and due to its popularity and location on the main road between Wareham and Swanage it can get very congested during the summer and parking in the village can be difficult and, at times, rather stressful. Please try not to park in the village as there are very few spaces.

If you are planning on spending all day at Corfe Castle or using Corfe as a base and taking the train to Swanage then it may be cheaper and more convenient to park just outside of the village at Purbeck Park at Nordon. Purbeck Park is a large car park which costs £4 all day (price subject to change). You can catch the train from the Purbeck Park (Nordon station) or easily walk into Corfe Castle which takes about 20 minutes.

If you prefer to park in Corfe Castle village then you have a few options.:

East Street BH20 5DR (Google map). If approaching Corfe Castle from Wareham along the A351 the car park is on the left before you get to the village. This is a National Trust car park so it’s FREE to park for National Trust members (see membership prices).

You can pay at the Pay & Display machines using cash. Alternatively you can pay for parking using PayByPhone by either using the app or online. The PayByPhone location code for this car park is 803345

Free car parking if you are lucky!

Directly opposite the National Trust car park is a turning signposted to Church Knowle. Just as you enter the road there is a lay-by on your right with parking spaces for around 10 cars. (Google maps). It’s free to park here all day however spaces fill up quickly so during the high season it’s almost impossible to park here. This car park is particularly convenient for walkers or photographers who plan to climb to the top of the hill to the west of Corfe Castle which offer spectacular views of the castle particularly at sunrise. A good view point can be found at here on Google Maps. Don’t leave photography equipment or valuables in your car as there is no CCTV.

There is a council-run car park just off West Street in Corfe Castle village. SAT NAV postcode BH20 5HH (Google map). The road is very narrow and access is right through the middle of the village square so it is not recommended during the summer months and holiday period as you’ll just end up adding to the congestion. Off season it should be fine.

Capacity 125 spaces (2 disabled). Car park charges are given below. Payment can be made using cash, phone or using JustPark www.justpark.com to pay either online or using the parking app. The car park location number for this car park is 7715