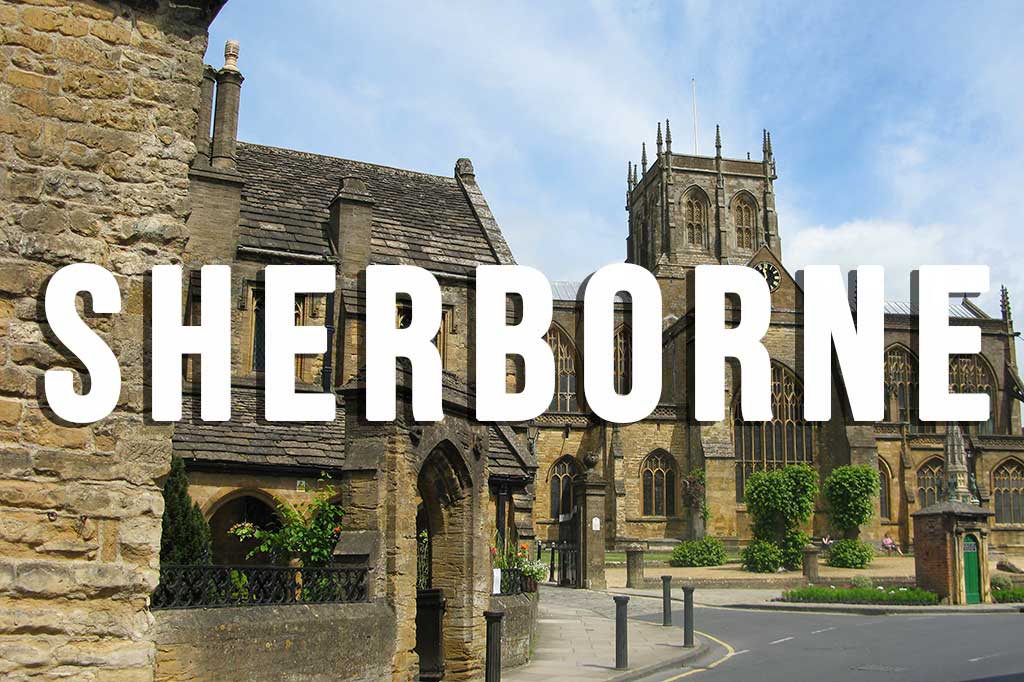 Sherborne is a vibrant market town in north west Dorset, situated on the edge of the Blackmore Vale and close to the border with Somerset. It is surrounded by wooded hillsides and green pastures. Yeovil is just 6 miles to the east. Of all the towns in Dorset Sherborne has to be one of my favourites. It has a distinctive charm with plenty of independent shops, cafes and places of interest. Sherborne is full of medieval and Georgian buildings which have been built using a lovely honey brown sandy limestone.

The magnificent Sherborne Abbey takes centre place in the town and is well worth a look inside (free admission but a donation is welcomed). The current structure mainly dates from the 15th century. Saxon and Norman remains also survive having once been used as a cathedral to the 26 Saxon bishops of West Wessex from 705-1078. Next door to the Abbey are the charming arches of the picturesque almshouses.

Just out of town can be found two castles. Sherborne Old Castle dates from the 12th century and now lies in ruins. The newer Sherborne Castle is a 16th century mansion built by Sir Walter Raleigh. Both are open to the public, admission charges apply.

In Thomas Hardy’s novel Tess of the D’Urbervilles Tess was born and brought up in the village of Marlott. This fictional village was based on the village of Marnhull which is about 10 miles east of Sherborne in the heart of the Blackmore Vale. The Durbeyfield home is a lovely thatched cottage (now called Tess Cottage) just south of the village. Tours of the cottage can be arranged through The Hardy Society.

Thomas Hardy’s last three novels – Tess, Jude the Obscure and The Woodlanders – were all largely based in North Dorset.

In Thomas Hardy’s The Woodlanders Sherborne is referred to as Sherton Abbas. The market place is where Giles Winterborne stood with his sample apple trees and Sherborne Abbey is where Giles and Grace Melbury talked of their future.

The town was also transformed into a 19th century fair for the 2015 film of Thomas Hardy’s novel Far from the Madding Crowd. Other key locations used in the film were West Bay, Mapperton House and Forde Abbey.

The Pannier Market is held every Thursday and Saturday from 9am to 5pm. The location is at The Parade – the small square outside the Cross Keys pub and next to The Conduit.

The Farmers’ Market is held on the third Friday in every month along Cheap Street from 9am till 1pm . The market typically has around 30 stalls.