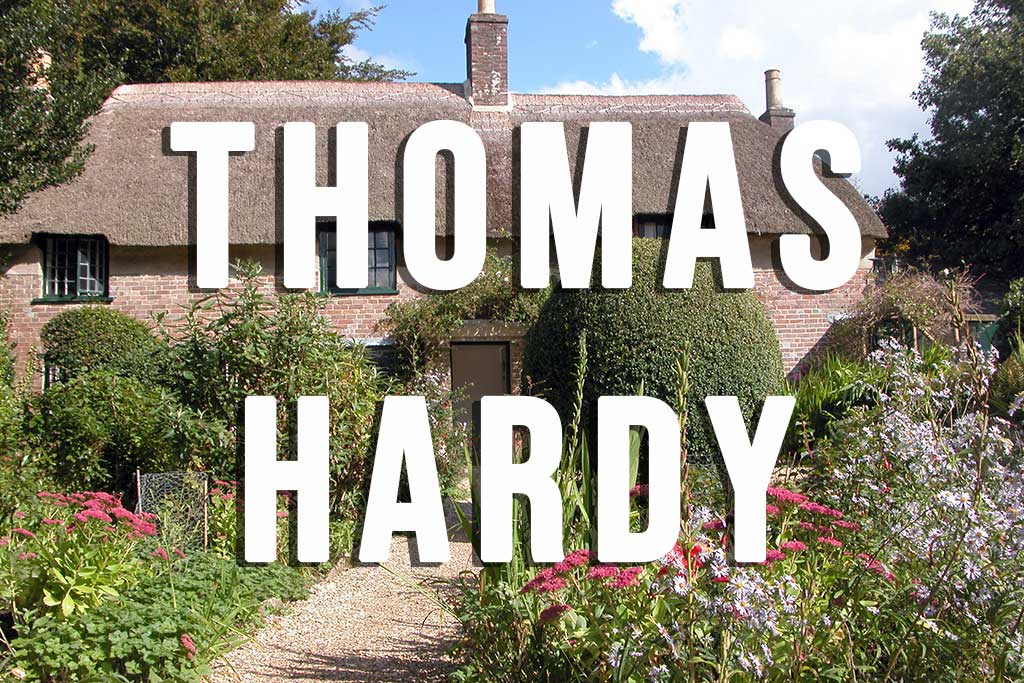 Dorset’s most famous literary figure, Thomas Hardy was born on 2 June 1840 in Higher Bockhampton to the east of Dorchester, where his father Thomas worked as a stonemason and local builder. He went to the village school in Bockhampton at age eight and then moved on to schools in Dorchester. His formal education ended at the age of sixteen, when he became apprenticed to a local architect.

Hardy trained as an architect in Dorchester before moving to London in 1862; there he enrolled as a student at King’s College London. He later found employment as an assistant architect working on projects in London and Windsor.

He was driven back to Dorchester by ill health in 1867 and decided to spend more time on his passion for writing. Hardy finished his first novel, The Poor Man and the Lady, but it was rejected by publishers. He still had to support himself by working as an architect. In 1869 he found work in Weymouth where he settled. The following year he met his future wife, Emma Lavinia Gifford, in St. Juliot, Cornwall, while working on the restoration of a local church. Emma actively encouraged and assisted Thomas in his literary endeavours and he finally made the break from architecture. Under the Greenwood Tree was published in 1872 to mixed reviews although it helped him to get a job to supply Tinsley’s Magazine with 11 monthly instalments of his next novel A Pair of Blue Eyes which drew heavily upon the circumstances of his courtship with Emma for its wild Cornish setting and its melodramatic romantic story. The novel proved successful and led to a contract to supply the more prestigious Cornhill Magazine with monthly instalments of Far from the Madding Crowd which was completed in 1874. In the same year Thomas and Emma married. The next few years were spent restlessly moving around, sometimes in London and sometimes in Dorset. It was during g this time that he wrote The Return of the Native (1878) and The Trumpet-Major (1880).

It was in 1881 they decided to permanently move back to Dorset living in Wimborne for a couple of years before moving to Max Gate, a house on the outskirts of Dorchester. Max Gate was designed by Hardy and built by his brother. It was from here that he went on to write some of his best work The Mayor of Casterbridge (1886), Tess of the D’Urbervilles (1891) and Jude the Obscure (1895).

Emma Hardy died suddenly in 1912. In 1914 Hardy married Florence Emily Dugdale, who was 38 years his junior. They had previously met in 1905 and she worked as his secretary. During the marriage Florence found herself increasingly in the shadow of Emma (whom Thomas had neglected and had been estranged for the last 20 years of their marriage). Thomas’s frantic and subdued love poetry – obviously written with Emma in mind – express deeply felt “regret and remorse” and were a cause of embarrassment and misery for Florence.

Following his death, on 11th January 1928, aged 87, his cremated remains were interred with national pomp in Westminster Abbey, while his separated heart was buried in the Stinsford churchyard in the same grave as first wife Emma. Florence did, however, inherit his rather healthy estate valued at over £6,000,000 in todays money.

Florence Hardy died in 1937, aged 58, at Max Gate. Her ashes were also buried in Stinsford churchyard next to Thomas and his first wife so obviously Thomas was forgiven.